Following is a post I wrote in January of 2011 on my Journeys with Autism blog. I have been thinking a great deal lately about Sarah. I want to honor her by telling her story here. 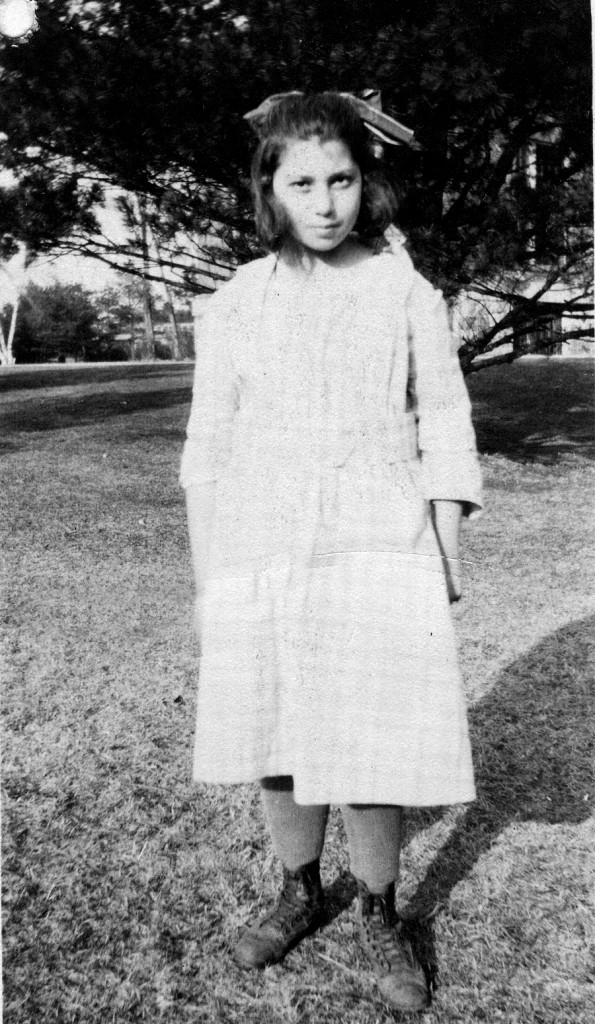 In 2009, while searching Ancestry.com for new information to add to my family genealogy, I discovered the existence of a relative about whom no one in the family had ever spoken. She was my paternal grandfather’s younger sister (my father’s aunt), and her name was Sarah. During a search of census records, I learned that she had been a patient at the Massachusetts State Hospital in Canton, MA in 1920, when she was 11 years old, and at the Wrentham State School in 1930, when she was 21. In other words, she appeared to have resided in state institutions from the time she was a child.

My father’s family has a rather unusual last name, so when I came upon Sarah, I felt fairly certain that she was related to us. Because the state schools were often warehouses for people with physical and mental disabilities, I felt from the beginning that Sarah had been “disappeared” from the family because she had been disabled.

In the face of this attempt to erase her from memory, I began a quest to learn everything I could about Sarah and to bring her into the light of day.

I was saddened by everything I found.

Sarah’s father, apparently, was known as “vigorous, gregarious, a hard drinker and a gambler, and inclined to shirk family responsibilities.” Her mother, on the other hand, was described as “mentally incompetent, elusive, and uncooperative.” I’m not sure that Sarah’s mother was actually any of those things, since living with a hard drinker and gambler who chronically refused to take care of his family very likely explained how she presented to the rest of the world.

It’s clear that the family was desperately poor, as evidenced by their contact with various social service agencies throughout the 1920s, and by the placement of two of Sarah’s younger sisters with foster families during the 1930s. There were, in all, seven children who survived early childhood. Four others died very young. Sarah was the second eldest of the surviving children, having been born in 1908.

I soon found out that she was, indeed, physically disabled, and had been diagnosed with “congenital spastic paralysis,” now known as cerebral palsy, when she was very young. But even more interesting are the possible markers of autism: she was a nervous baby, cried continually, tore at her hair, scratched her face unmercifully, and first talked at 4 years of age.

In 1915, at the age of 7, Sarah was placed in a family home with another disabled child. In September of that year, she began in the first grade at the local public school.

In 1916, she was placed in a state home—the Massachusetts Hospital School in Canton, MA—because her foster mother could no longer afford to take care of her. A teacher at this school considered her to be “of slow mind, lacking in concentration, and having problems with attention.” (ADD, anyone?) In a painful example how easily disabled people are dismissed, it was suggested that Sarah be placed in a school for the feebleminded when she was older.

By 1920, the people at the Massachusetts Hospital School said that they could do no more for her. She was judged “not mentally competent” to compete with the children in her grade. It appears that she was placed in another family home before a space opened up for her at the Wrentham State School.

She entered the Wrentham State School in 1921, at the age of 12, with the hideous diagnosis of “moron.” As I look at a photograph of her taken around that time, I find myself amazed that anyone could have missed the focused, sad intelligence in her eyes. In fact, when I first saw the photograph, I burst into tears. She was the only person in the family whose eyes, whose facial expression, and whose look of anger and sadness at the insanities of the world reminded me so thoroughly of my own.

About 10,000 people were institutionalized at Wrentham during its history. Despite Sarah’s diagnosis, she was described as adapting herself very quickly to her surroundings, expressing herself relatively well, and displaying a full range of emotions. Apparently, she always tried to do her best and took pride in neat work—words that would have perfectly described me as a child. She was also a good singer—another trait that we share in common.

Unfortunately, Sarah began to fall apart in the late 1920s. She began to behave and talk in “peculiar” ways, becoming depressed and unhappy. She felt teased by her peers. She lost her appetite for food, and her behavior became disruptive. One can only guess at what she was going through. Had she been assaulted? Had she collapsed under the weight of chronic institutionalization? Had her longing for friends, family, and home finally become more than she could bear? We will never know.

She showed no evidence of being delusional and yet, when she left Wrentham in 1930 and entered the Foxborough State Hospital, she was given a diagnosis of “dementia praecox,” the now-defunct term for schizophrenia. It was certainly not unusual for autistic people, especially women, to be misdiagnosed with schizophrenia and other mental disorders, especially when the process of institutionalization itself created mental and sensory breakdowns. As a state mental institution, Foxborough was a dumping ground not just for physically and mentally disabled people, but also for poor non-disabled children and recalcitrant wives. In those days, it was not unusual for poor children to be placed in institutions, and for rich people to take them out and hire them as maids.

Sarah, however, never had this dubious opportunity. Instead, she entered the Foxborough State Hospital at the age of 21 and never came out. She died of tuberculosis of the lungs in 1934, when she was 25 years old. When I received a copy of her death certificate, I was horrified to learn that she had been ill with tuberculosis for ten months before she died. Ten months, suffering in hell with a wasting disease. It makes me physically sick to think about it.

Under most circumstances, the indignities visited upon the patients at Foxborough followed them into death. In general, the inmates (for that is what they were) were buried on hospital grounds, their graves marked not with their names, but with their patient numbers. As a result, if anyone in a later generation were to visit his or her deceased relative, it would be impossible to know where to look.

I was determined to honor Sarah by visiting her grave, and when I wrote to the state mental health agency to find out her patient number, I was surprised to learn that she had not been buried at Foxborough at all, but in the Arbeiter Ring (Workman’s Circle) cemetery in Boston. I have no idea who got her out of Foxborough to bury her properly, but I hope that the person is reaping untold benefits in heaven for this act of humanity. There is a non-profit agency that oversees all the old Jewish cemeteries in Boston, so I wrote to them right away to see whether they would send me a photograph of Sarah’s grave. To my dismay, I learned that there was no grave marker at all.

So Bob and I decided to get Sarah a proper grave marker, which was placed this past fall. On the marker appear her name, her date of birth, her date of death, and my favorite line from Psalms: Those who sow in tears shall reap in joy.

I hope that she has found joy in the next world.

I hope that she feels the peace of knowing that she has the dignity of a marked grave.

I hope she knows that her picture has taken its place on our wall, along with those of our other ancestors.

I hope it heals her that I am telling her story and making sure that people remember the shame and injustice of what happened to her.

My Hebrew name is now “Rachel Batya bat Sarah Channa”—Rachel Batya, daughter of Sarah Hannah. I have taken Sarah as my spiritual mother. Every Friday night at our Shabbos table, I receive a blessing, and her name is blessed with mine. She never had a chance to have a child of her own, but in some way that I don’t entirely understand, I am her daughter. I am a disabled woman, born into the same family two generations later, and I have what she didn’t have. I have the power to stand up and say, “No more.”

Not now. Not ever.

Categories
Ableism, Institutionalization, Medical model of disability, Stigma, Textual representation, Visual representation
« Autism and Systemizing: Why Structure Rocks (And It’s Not What You Think)
ZOMG! Look! A Disabled Person Does Something! »