Scapegoating in the Aftermath of the Sandy Hook Shooting: Yes, It’s Really Happening to Us 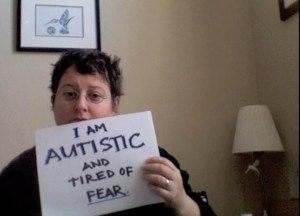 Despite a number of clarifications in The New York Times and on ABC News, NBC News, and CNN that Asperger’s is not a predisposing factor for premeditated violence, the spurious association of Asperger’s with the violence in Newtown, CT is still strong. In part, the media is responsible for not having clarified early on that yes, Adam Lanza shot 27 people and yes, Adam Lanza was apparently autistic, and no, one had nothing to do with the other. Such failures were rife. For example, in exploring a possible explanation for the shooting, Dr. Xavier Amador opined on Piers Morgan Tonight that people with Asperger’s are missing an essential element of humanity:

Well, actually, a symptom of Asperger’s, and this is one report coming out which may or may not be true, is something’s missing in the brain, the capacity for empathy, for social connection, which leaves the person suffering from this condition prone to serious depression and anxiety.

But the media’s response is only a symptom of a much larger problem. Its willingness to blame Asperger’s is a reflection of a cultural association between disability and evil that has lasted for centuries. As Colin Barnes writes:

Throughout the Middle Ages, disabled people were the subject of superstition, persecution, and rejection. Haffter (1968) has pointed out that in medieval Europe disability was associated with evil and witchcraft. Deformed and disabled children were seen as ‘changelings’ or the Devil’s substitutes for human children, the outcome of their parents’ involvement with the black arts of sorcery. The Malleus Maleficarum of 1487 declared that these children were the product of the mothers’ intercourse with Satan… Protestant reformer Martin Luther (1483-1546) proclaimed that he saw the Devil in a profoundly disabled child. If these children lived, Luther recommended killing them.” (Barnes 2010, 21)

Nineteenth- and twentieth-century eugenicists picked up this connection between disability and depravity, believing “that there were genetic links between physical and mental impairments, crime, unemployment and other social evils” (Barnes 2010, 26). The linkage has come down to the present day in the pernicious belief that disability is synonymous with narcissism and anti-social behavior (Siebers 2011, 34-35).

I’ve read a number of comments online that suggest that autistic people and autism parents are overplaying the scapegoating of Asperger’s. People say that the mainstream media has issued its clarifications and that the problem is solved. Unfortunately, it’s not that easy. Once this iteration of the cultural narrative about disability hit the airwaves, it quickly took root among ordinary people. Giving life to a well-worn untruth while people are in a state of nearly irrational fear is a difficult thing to undo. To give you a sense of just how deep the damage goes, I offer the following examples.

On the Volconvo forum, one commenter refers to people with autism and mental illness as “broken-minded defects” who are “dangerous” and whom society needs to monitor and imprison inside locked wards:

A commenter on a TIME article suggests that autistic people are “mutants” who need to be placed in “psychiatric facilities” and ultimately removed from the gene pool for the good of society:

And then there was the person who started a Facebook page and called for the killing of autistic children. (To its credit, Facebook quickly removed the page.) 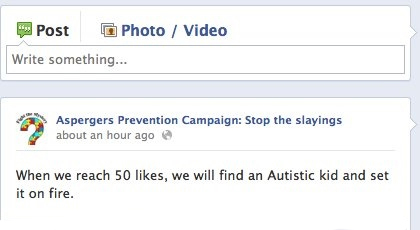 This kind of scapegoating has begun the inevitable creep off the major news sites and social media and into the lives of ordinary autistic people and their families. Three friends have given me permission to share their experiences.

Here is the story told by my friend Sara, a woman with Asperger’s. While standing at the post office five days after the tragedy, she spoke to a woman, an Ivy League graduate, who said that Asperger’s — and Asperger’s alone — had caused the Sandy Hook shooting. Sara posted the following on her Facebook status: 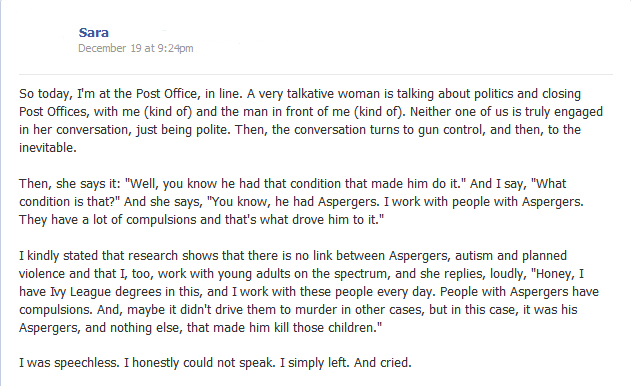 Another friend describes a situation in which a false belief in a link between autism and violence caused his wholly nonviolent autistic child to become suspect in the eyes of a relative:

Finally, my friend C describes a more frightening scenario. Her son J, who is 14 years old, had gone to Wal-Mart to look for a Christmas tree. He has Asperger’s and bipolar disorder, and people in his community are aware of his diagnoses. He was wearing headphones to block out sensory input, and, at one point, attempted to find a quieter place in the store. He had his hand on a price list in his pocket when someone who knew him went into a panic — a panic that resulted in the young man’s injury: 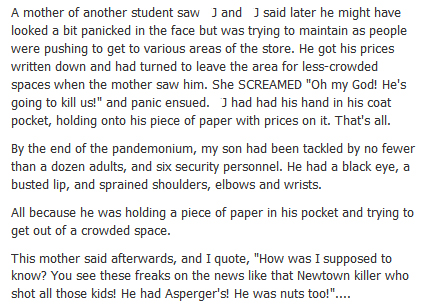 Like Trayvon Martin in his hoodie, the scary guy on the block appears to be, in the minds of some people, the kid with Asperger’s with his hands in his pockets. I’m just waiting for someone to suggest that, as Geraldo Rivera said about black men giving up their hoodies, young men with Asperger’s should wear pocketless clothing.

The stunning level of irrationality and fear being leveled at people with autism is tremendous cause for concern. In the face of this scapegoating,  autistic people and autism parents are countering with positive images of autistic children and adults that show us as full human beings — ordinary, extraordinary, beautiful, and proud. To see these images, please go to the following Facebook pages:

Let’s spread the word to end the scapegoating. And let’s keep doing it, now and always, wherever and whenever we can.