Does My Presence Offend Your White Able-Bodied Male Privilege? 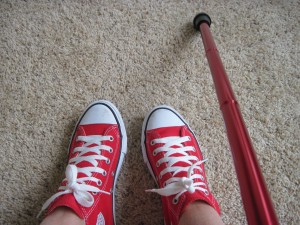 I had several errands to run today. I went to CVS to buy some things for the school supplies drive at the bank. Then, I went to the bank to donate the supplies and deposit a couple of checks. And then I had to mail some paperwork at the post office.

All of my errands went smoothly, everyone I spoke with was very friendly, and I was feeling pretty damned wonderful. And then I got hit with a faceful of entitlement on my way out the post office door.

I was about to walk out the door went I saw a man coming directly toward me. He was white, around the same age as I am, and judging from the determination and speed at which he was walking, physically able-bodied. He was also a big man — over six feet tall and strong. From the way he was walking toward me, it was clear that he assumed that I was just going to get out of his way.

Please bear in mind he was looking at a woman who is 5’1″ and uses a bright red cane. The only way he could have missed either of these things is if he were walking toward me backwards. Which he wasn’t.

Because I am a courteous person, and because I tend to take the long way around people with a lot of attitude, and because it used to be possible for me to make sudden quick movements without risking injury, it’s been my habit to move aside for people like him. But in this case, I instinctively knew that if I tried to get out of his way as quickly as I needed to, I was either going to stumble or I was going to twist myself the wrong way and injure my hip again.

So I just stopped for a moment, made clear my intention to keep going along the same trajectory, and said, “Excuse me.” I figured that he wouldn’t be such a total jerk as to run right into me. And he didn’t. Instead, he audibly sighed, stared me down with a look of utter disgust on his face, shook his head as though I had just committed some sort of unthinkable breach of social ethics, and went around me.

I turned around to look at him, and as he walked away, he was still shaking his head as if to say, “What is the world coming to when an able-bodied white man can’t expect people to get out of his way?”

I was just shocked. I find that I lose my ability to speak in these moments — not because I have nothing to say, but because I am an inveterate problem solver and I know straightaway when problem solving is out of the question. This was one of those moments. The level of privilege that came at me was extreme. He really assumed that the space I was standing in was his, and he didn’t stop for a moment to think, “Wow, that lady is using a cane. Perhaps she might have difficulty moving out of the way. Perhaps she is in pain. I will be gracious and go around her.” Oh, no. God forbid.

As I stood there feeling a combination of powerlessness, shock, anger, and sadness, I realized that I had to say something. Anything. It almost didn’t matter what it was. I was hoping to say something that felt powerful, but all I could do was to shout after him:

Oh, God. So not good enough. I mean, it’s okay in a pinch, but I’d like to figure out some brief and effective way to say, “Excuse me, white able-bodied dude. I know you’re not accustomed to the idea that other people have the same right to space as you do, but on most planets THIS BRIGHT RED CANE is a signal that YOU SHOULD BE THE ONE TO MOVE.”

« Updated Post: Just How Far We Are From Equality: The San Diego Museum of Man’s Access/ABILITY Exhibit
More from the Land of Microaggressions, in Which I Claim My Space and Lose My Silence »