Stymied by What I See

Ours is not the task of fixing the entire world all at once, but of stretching out to mend the part of the world that is within our reach. Any small, calm thing that one soul can do to help another soul, to assist some portion of this poor suffering world, will help immensely. It is not given to us to know which acts or by whom, will cause the critical mass to tip toward an enduring good. — Clarissa Pinkola Estes, We Were Made for These Times 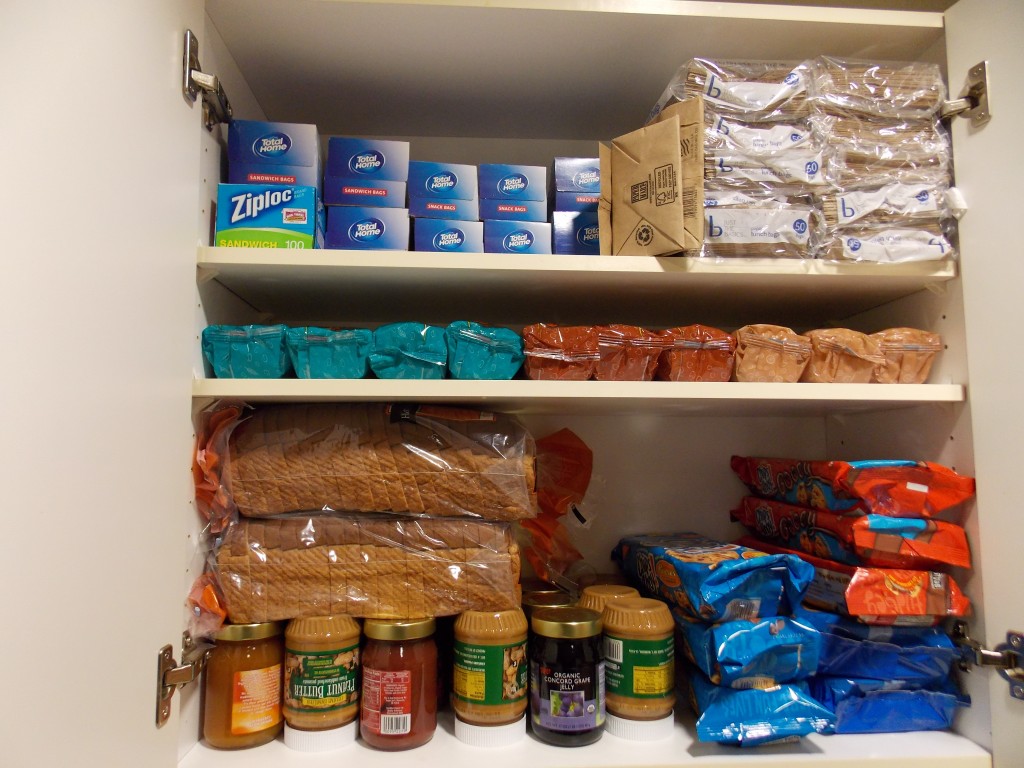 I have been distributing food to homeless and hungry people in Santa Cruz for a little over three months. I love what I do. I love the people. I look forward to seeing them and serving them.

[This photograph shows a kitchen cabinet containing ingredients for lunches -- loaves of bread, jars of peanut butter and jelly, and boxes of cookies -- along with boxes of sandwich bags and paper bags.]

Now that the weather is getting colder, I am really concerned about the danger of people dying of exposure. Four people just north of here, in Santa Clara County, have died of exposure in the past few weeks. While Santa Cruz usually has a temperate climate, it’s been below freezing at night. A few weeks back, I had my husband send me all of the hats, scarves, and mittens I made when we lived in Vermont, and I gave them away to people on the street. I also made a hat and scarf for a friend who has been homeless for several months. I can’t stand the idea of people being cold overnight.

I have a winter coat that I brought with me from Vermont. I’m going to give away. I had been saving it, thinking that if I visit the snow sometime, I’m going to need it. But why keep it stored in my closet for another day when people are cold right now? If I need a winter jacket, I can always get one. I do not need to worry about things like that. So I’m keeping my eye out for other jackets that I can pick up in thrift stores and give to people who need them.

So there is much to do — and much that troubles me. One of the most troubling things is the way in which people respond to what I do. First, there are the people walking through the park who have homes. They sometimes see me distributing food and take a moment to say something like, “Oh, wow. You’re handing out food? That is so nice of you.” While I always appreciate a compliment, I find myself getting impatient with that particular one. I don’t need people to tell me what a great thing I’m doing, for the simple reason that I don’t think I’m doing a great thing. I think I’m doing the right thing, as any human being should do, and I would like more people to get involved.

And then there are the responses from people on the street. It’s the gratitude that calls me up short. The gratitude — for a sandwich, a piece of fruit, some cookies, and a kind word — resonates with all that is wrong about the situation. People say things like “You’re an angel” and “You’re just so wonderful,” and “God bless you for doing this.”

These responses are genuine, and I take them in with appreciation. I say things like, “It’s my pleasure” and “God bless you, too.” But it breaks me apart inside to realize that people are seeing God in a peanut butter sandwich — and that people are so disrespected, spat upon, fearful, and loathed that any kindness is like manna falling from heaven.

As much as I love what I do, I am also feeling stymied by the lack of any discussion about how to get people out of homelessness. At least in my city, any and all official discussions of homelessness center around crime. It illegal to sleep outside between 11 pm and 8:30 am, and people are routinely woken up, given tickets, and told to move along — to where, exactly? And with what money are they going to pay those tickets? And then if they try to sleep outside during the day, they’re not supposed to have a blanket on top of them. They can’t be on a bench for more than an hour. It goes on and on.

This is an old story, of course. It’s always been a crime to be poor and have no choices.

I would like to be involved in work to deal with the systemic problems that underlie homelessness, but I don’t even know where to begin. At this point, I feel that all I can do is to engage in palliative measures. There is nothing wrong with palliative measures, of course. God knows, when people are suffering, they can’t just wait until the injustices are fixed. That could take generations. They need whatever support and comfort I can give, and I have the resources to make that available. I have the resources to buy food for lunches. I have the time to make them. I have the power to do a great deal. I am not discounting the importance of any of that.

But given that virtually all of the long-term homeless population is disabled, I wonder why disability rights organizations are not getting involved here on the systemic issues. This is ground-level work. And yet, even if there were discussions going on about how to address the underlying issues, and even if there were political action taking place, I know that  most of it would be inaccessible to a person with my disabilities.

I sometimes find myself falling into “overcoming” mode — the feeling that if I just pushed myself a little further, I could show up in noisy spaces that overload me, or do without captioning, or talk to people whose speech is so fast that blows right past my auditory delays, or end up exhausted for days — for the sake of discussion and political action. I keep hearing that internalized ableist voice saying, “You’re not doing enough. You need to be doing activism the way that other people do it.” I keep thinking that if those discussions were happening, and if those political actions were happening, I’d just have to suck it up and pay no attention whatsoever to how my body actually works.

I need to be careful of that voice. At the moment, I am creating my own accessibility and my own activism, and until the world opens up in terms of access, that will be how it will remain. I want to work on systemic issues, but to do that, I would likely have to spend an inordinate amount of time fighting for access. I’d rather not. I’d rather channel all of that energy into the work itself.

So I’ll continue to do my best by people, and to keep my eyes open for all kinds of opportunities to further be of service. That’s the best I can do in the world as it’s presently constructed. And for the people I serve, even a small act of kindness is writ large in their lives. So I go forward with the faith that no moment of channeling the larger love is wasted, and that all will come to fruition if we continue to do right.

« Why I Am Giving Up the Word “Privilege”
Accessibility: My Kid Makes It Happen! »