I’ve recently read Rosemarie Garland-Thomson’s 2002 article “The Politics of Staring: Visual Rhetorics of Disability in Popular Photography,” and it’s given me a number of insights into the genre. (The article has also inspired me, you should forgive the expression, to read her 2009 book, Staring: How We Look, for further ways of looking at the problem.) In “The Politics of Staring,” Garland-Thomson creates a taxonomy in which disabled bodies are represented in popular photography according to four different categories, one or more of which can be present at any time:

1. The wondrous elicits admiration or astonishment at the disabled person by juxtaposing what is considered an extraordinary body with pedestrian surroundings, bringing together the exceptional with the ordinary. Among its many problems, this particular approach has the impact of making disability look unusual and distances the viewer from the fact that disabled bodies are relatively common (Garland-Thomson 2002, 59-61).

2. The sentimental elicits pity at perceived suffering and arouses a humanitarian desire to help and to feel oneself sympathetic, kind, and noble. As Garland-Thomson points out, this genre grew out of “the larger nineteenth-century bourgeois culture of fine feelings” in which “[t]he pathetic, the impotent, and the suffering confirmed the Victorian bourgeoisie by arousing their finest sentiments.” (Garland-Thomson 2002, 63)

4. The realistic attempts to erase the difference between disabled and nondisabled people by hiding visible indicators of disability and “normalizing” disabled people (Garland-Thomson 2002, 69).

Most visuals communicate different messages based on the context in which they appear and the text that accompanies them; these differences are especially striking when it comes to the ways in which images of disabled people are purveyed. Take, for example, the following photograph of a disabled swimmer that has been making the rounds on tumblr: 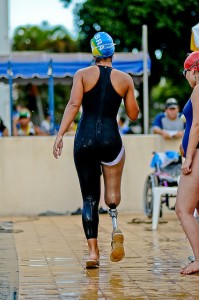 For me, one of the most striking things about the photograph is how ordinary it feels: it’s simply a woman walking away from a swimming pool. When I try to fit the photograph into Garland-Thomson’s taxonomy, I fail. I see no trace of the sentimental at all, no helplessness, nothing to pity. I suppose I could assign the photograph to the category of the wondrous, since the picture juxtaposes the unusual (a swimmer with a prosthetic leg) with the pedestrian (people gathering under an awning, a man in a baseball cap looking out over the wall, another swimmer standing nearby). But since the woman is simply walking, I feel little sense of amazement.

I could also assign it to the category of the exotic, since in defying the stereotype of disability as weakness and frailty, the subject appears almost larger than life in her strength and power. The fact that the other swimmer is rather unabashedly staring at the woman’s prosthetic adds to the sense of her being cast as other and alien. But given that the exotic depends upon sensationalism, and that there is nothing particularly sensational about a woman walking away from a swimming pool — after all, that’s what the prosthetic is designed to enable her to do — that category doesn’t quite fit either. In fact, the photograph seems so (pardon the pun) pedestrian to me that I’m tempted to put it in the realistic category, but because there is no attempt to hide the subject’s disability, that category doesn’t apply.

Watch what happens, however, when the photograph is framed in a different context and with an accompanying caption: 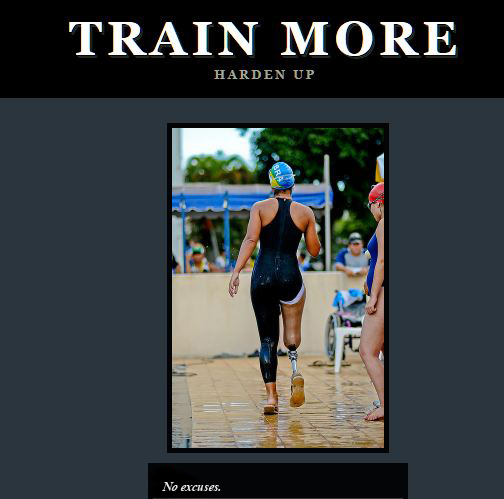 The photograph is posted on a site about high-level athletic training that exhorts its readers to increase their level of commitment and make their bodies stronger and stronger. The site is replete with photographs of triathletes, and focuses particularly on the muscular nature of their bodies. One photograph of an athlete’s well-muscled legs is accompanied by the caption He didn’t get these without sacrifice. Get out there. Another photograph ridicules a fat, round man with the caption Spandex: It’s Not For Everyone. It’s clear that resting on one’s laurels, being satisfied with one’s level of training, or even, God forbid, having softness, visible fat, or frailty in one’s body is not of value. The point is to be lean, tough and, to borrow Paul Longmore’s wonderful turn of phrase, “severely able-bodied.” (Longmore, quoted in Garland-Thomson 2004, 33)

Enter the disabled body. The woman in the photo is clearly an athlete; her body is strong and powerful. One might be tempted to say that the exhortation at the top of the page is directed at the woman herself; after all, there is nothing wrong with high-level athletes, disabled or not, increasing their levels of training. But in the context of the site, her prosthetic leg sticks out, as it were, because it is so at odds with the many pictures of well-muscled legs and the celebration of abled bodies being as able as possible. Moreover, her disability catches the eye and sets her apart because she is the only disabled person in all of the photographs. In the context of the site, then, she is represented as both wondrous (familiar and ordinary as an athlete, but extraordinary and out of place as a disabled athlete) and exotic (strong and powerful in her body, but alien and apart in her prosthesis). On both scores, her photograph invites gawking.

For the able-bodied audience, this gawking is put to significant use in the inspirational text beneath the photograph, which reads No excuses. This text brings the image squarely into the realm of the sentimental. The message is If this (poor, one-legged) crip can be this strong (and brave! and gutsy!), you have no excuse for not training harder. The reader is thus made to feel guilty for not working as hard as the disabled athlete. The narrative is not one of amazement; it’s one of pity. Yes, she is still a strong, athletic woman, but her image is not inspirational because she is an athlete. It is inspirational because she has a prosthetic leg. The text implies that it is some sort of superhuman feat for a disabled person to be an athlete, which assumes that there is loss and deficit that she constantly has to strive to overcome. If a disabled person can do the impossible, the reader is exhorted, how much more should able-bodied people feel grateful for their able bodies and push those bodies to great lengths.