So Who are You Calling a Retard, Ann?

By now, most people are aware of last night’s tweet by Ann Coulter, in which she commented upon the presidential debate in a manner consistent with her usual good taste and civility:

Oh, yes. Another disability slur. Another piece of mockery. Another way of saying how much you despise someone by comparing that someone to a disabled person. Oh, ha ha ha. So very clever. It just never seems to get old, does it?

Let’s start with the simple facts: Ms. Coulter used this slur against the President of the United States. She called the President of the United States a retard. You don’t have like Obama and you don’t have vote for Obama to know that you show some respect to the man by virtue of the elected office he holds. Maybe they didn’t teach this particular civics lesson at Cornell, where Ms. Coulter went to school, but they taught it at my elementary school in Brookline, Massachusetts, and most people who understand what it takes to hold together this fragile entity called a society understand that you have to show some respect to the office of the President and to the person who holds it. The man was, after all, elected by We The People.

But what’s worse — much, much worse — is that Ms. Coulter cast out a slur just as hateful as the N-word, or kike, or faggot. It’s hate speech. And it’s not just about some nameless, faceless people out there. It’s about intellectually disabled people, it’s about developmentally disabled people, and it’s about anyone with a disability who has been called a retard, or considered a retard, by people in desperate need of a clue.

So let’s put a face on who you’re calling a retard, shall we Ann? Because it wasn’t just the President. It was all the disabled people you decided to slur as well. 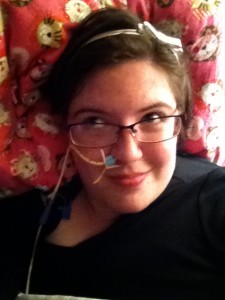 Right here is my friend Lydia — my beautiful, loving, kind friend Lydia. This is Lydia, who has autism, anxiety, periodic episodes of depression, and a laundry list of physical diagnoses.  She also happens to love her church, cats, and the color pink, and she writes books, poetry, and music.

« Staring But Not Seeing: A Review of Seeing a Color-Blind Future: The Paradox of Race by Patricia Williams
This Blog is a Disability-Safe Space »